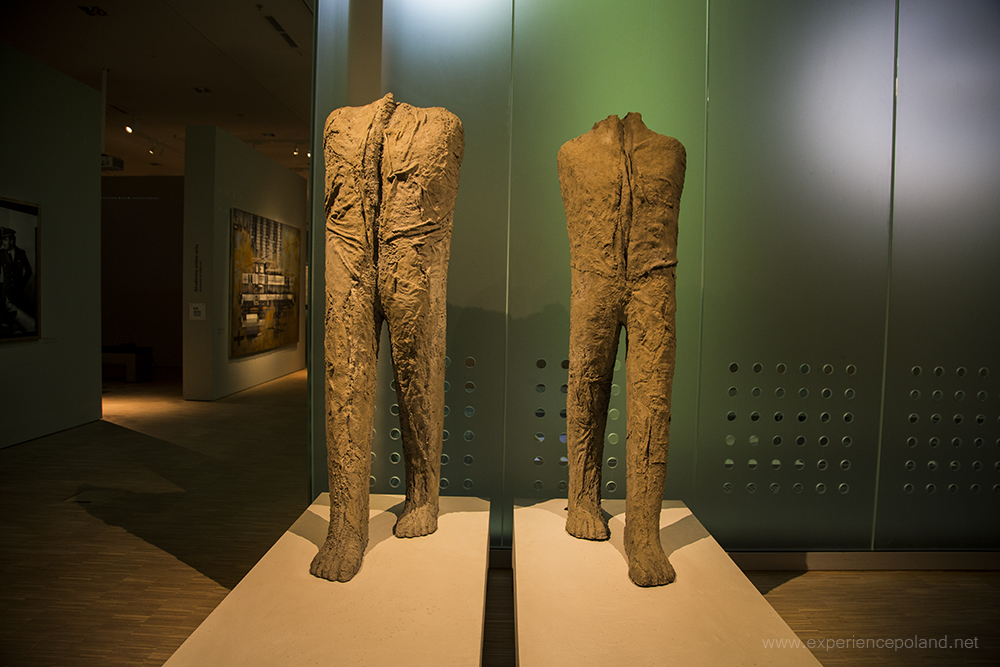 Poland’s history is long interwoven with a rich tapestry of textile art, trade and fibre development. Over the centuries Polish artisans have created textiles that both protect from the elements and inspire with their beauty. Around mid to late 1960s a number of Polish textile artists appeared on the world scene of textile art and created an instant interest in their works, designs and installations. A travelling tourist will be greeted by innumerable reminders of the glory of  Polish textile traditions across the country.

In experiencing Magdalena Abakanowicz’s (1930-2017) original large-scale textile and her fibre art works, Polish textile tradition is seen at its zenith. Magdalena is one of Poland’s most internationally recognised and acclaimed artists and her works embrace conventional sculpture and large, open space exhibits. Emerging from the dark days of war trauma and post-war oppressions, her works remained fresh, provoking and timeless. Magdalena’s works legacy is still relevant today as it was during her career.

Magdalena’s early and first ever 3D textile works, known as “Abakans”, changed the world of natural fibre and textiles for ever. In the creative process, Magdalena developed and explored own weaving and 3D knotting techniques as well as used non-traditional materials as horse and goat hair, sisal or jute.  For the first time in textile art history the artist moved away and broke centuries old tradition of flat, two-dimensional textile art forms. The headless figures with no distinguishing features speak to every generation on their own experiences of isolation, anonymity, voicelessness or some form of conformity.

A large collection of headless, human like figures, “Crowd” are standing high, captured in the still moment of a movement. These figures are sending a message to the world of Abakanowich’s role as a leading, innovative textile artist with a strong structural presence in her work and installations.

The stunning exhibition’s site of  Silesia Museum, Katowice, adds to the grand effect the works are creating. The Museum is one of the most interesting exhibition spaces one can come across Poland, if not Europe. Frosted, intricately printed glass panels are hiding an unusual entry to the museum’s site. They work in beautiful and minimalistic, monochromic harmony with the landscape and colour and textures of the surrounding environment. A mix of post industrial creative development is luring us under ground.

The size of the place and its first impressions don’t disappoint. Rather – confirm the unexpected…this place is a must to see, feel, explore and experience.

The figures are exhibited a few floors underground, in a former, deep deposit coal mine.  This unusual, but very appropriate location becomes an important part of the impact “Crowds” are creating.  The headless figures are reaching out from their past into our future and beyond.

Large, monumental, human like structures cannot be missed or ignored…They are the language of expression Abakanowicz so successfully used over the decades of her prolific art practice.

Abakanowicz’s influence on the world’s textile scene and fibre art directions have been as big and significant as her art forms. She successfully placed Poland on the world map of textile art. Her works are timeless as much as the forms she had created. Every generation can relate to their strength, unspoken voices and somewhat confronting structures, a silent but strong presence in the world.

The journey to the site and its underground exhibition area is also a spiritual journey…The site witnessed daily lives and regular life journeys of many, including my own….long walks during changing seasons, the joy of spring followed by colourful and rich autumn at the park surrounding the mine site. It was the canvas of previous life, dreams, and vision of a bigger and better world during the time of economical and political challenges of the past.

The former coal mine site. My former backyard. My homeland.

The beating heart of creative Silesia, deep in the bosom of Poland.

Scroll back to top